Hydration is an important aspect of the overall performance of an athlete. Both amateur and professional athletes alike are encouraged to start a training session or a game well hydrated and to consume sufficient amounts of fluids to limit water and salt depletion. This statement may seem like common sense, but there is evidence and several studies have shown that many athletes begin exercise already dehydrated.

Exercise is accompanied by an elevation in metabolic rate, which causes body temperature to rise. Although the elevation in body temperature may be small, in high ambient temperatures, core body temperature can rise even higher. In warm weather conditions, athletes can lose 1-2.5 liters of sweat during each hour of training or competition. There are several factors the influence the degree to which an athlete sweats. Temperature, humidity, the intensity of exercise, heat acclimatization and cardiorespiratory status all influence sweating. Any increase in one or more of these factors will lead to a person sweating more.

Most athletes lose more sodium and chloride when they sweat than any of the other electrolytes. This is further exacerbated if 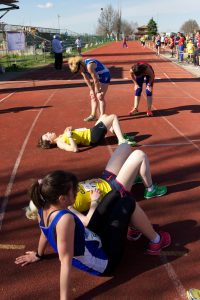 the athlete is not acclimatized to warm weather conditions as some of their competitors may be. Some research has shown that there may be a genetic component involved in some people because they have increased sodium loss no matter how good their cardiorespiratory status may be.

It can be very difficult to keep up with heavy fluid and electrolyte losses during training and competition. Rehydration is often challenging after exercise because an athlete must ingest more fluid than what is lost in sweat. It is important to practice safe and effective rehydration techniques which involve both fluid and electrolyte replacement.

Many athletes have experienced the dreadful heat cramps that occur during prolonged exercise when profuse sweating has occurred. When significant water and sodium deficit occurs in the body, motor neurons become hyper-excitable due to altered mechanical stress on the nerve endings as well as changes in electrolyte concentrations. The result of this physiology leads to what we call a cramp. Athletes that suffer from heat cramps sweat considerably, lose copious amounts of sodium and chloride and typically have low/inadequate dietary salt intake. Fluid and sodium intake are crucial to help combat cramping.

When Drinking Too Much Water Makes Things Worse

It is possible that some people consume water at a faster rate than the kidneys filter and excrete it, which can lead to hyponatremia, Some predisposing factors that can lead to hyponatremia are 1.) Athletes with greater than average sweating rates and/or large sweat sodium losses and 2.) Excessively drinking water or electrolyte free fluids before, during and after exercise. Compared to triathlons and marathons, the reported incidence of hyponatremia in soccer, tennis, and baseball is low. The severity of hyponatremia can vary from mild symptoms that include fatigue, slight nausea, and headache to very severe symptoms that include incoordination, confusion, and seizure.

Receiving/consuming fluid and electrolytes at regular intervals during competition and training is the best way to prevent dehydration and other adverse effects of fluid loss. Oral and intravenous therapy are the two most common ways to safely and effectively rehydrate after strenuous exercise or competition. When receiving an IV drip therapy it is important that the IV is appropriately balanced with the right combination of fluid, electrolytes and minerals.

At the Holistique IV Lounge in Bellevue WA, all of the IVs are formulated, compounded and administered by doctors. If you are looking for safe and effective hydration therapy before or after exercise, stop in for a consultation with one of the doctors on the many choices of hydration they offer in the lounge.

Dr. Justin Newell is a  licensed Naturopathic Physician in the State of Washington. He specializes in the treatment of men’s health, sports medicine, physical medicine, and IV therapy. Addressing the root cause in these specialty areas, help to optimize a person's physical, mental and emotional health.